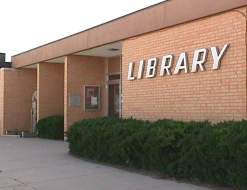 The Satanta library was founded in November 1931 by four Satanta women’s clubs: The American Legion Auxiliary, Santee, Owaissa, and Wohelo. The Santee and Owaissa clubs were both still active until a few years ago. The young Owaissa is still active today and is called the YO club.  At the back of the yearbook is a handwritten copy of the bylaws and a newspaper clipping with the heading “Clubs launch Campaign for City Library”.

The Library was founded during the Great Depression and the lean economic times of the Dust Bowl years.  During this time the library received funding for the librarians salaries from the Kansas Emergency Relief Committee (KERC).  Later funding came from the Works Progress Administration (WPA) which was part of the President Franklin D. Roosevelt’s New Deal project.

The November 17, 1931 minutes noted that the Constitution and By Laws were read and accepted as written. The Elementary School Board voted to allow the library be located in a room at the grade school building.  The first Library Board members were:

The rules for checking out a book in 1933:  only ONE book could be checked out on a card, unless the individual pay 10 cents for a second card to permit checking out a second book.

History of the Satanta Library was first shared at the December 1, 2008 Satanta Chamber of Commerce luncheon.  The information was drawn from the library board minutes from 1931-1944 by Leanne Tschanz, Dudley Township Library Board member.

Author’s notes:  My primary source of information is the handwritten minutes of the library board from November 1931 to January 1944. The minutes were recorded by hand in a 1929 Yearbook compliments of James Patrick, a bonded abstractor.  James Patrick bought the first building lot in Satanta in 1912 and his real estate office was one of the first businesses in Satanta.

Dudley Township Public Library
After school special was Apple themed today in honor of Johnny Appleseed Day on Monday! Students helped make their snack (applesauce) by practicing their peeling and cutting skills, played "Worm in the Apple" and made a cute button craft!

Dudley Township Public Library
The cutest, and ONLY acceptable type of dog-earing! 😁
View on Facebook

Dudley Township Public Library
Who is excited for our first Week Wigglers class today???
Kiddos, lapsit to age 5, are invited to join us at the library for a fun weekly story time hour learning letters Wednesday mornings from 11 to noon!
View on Facebook

Dudley Township Public Library
I'm not sure who will enjoy this more, the library staff, dragging out the Free Carts every morning or patrons, but we are excited to FINALLY have an automatic door opener at the library!

Dudley Township Public Library
Britta Young is the newest “1,000 Books Smartie” JUST in time for Kindergarten, on August 25th, with the Dudley Township Library’s “1,000 Books Before Kindergarten” challenge. Britta’s family have been vital contributors in nurturing her love for reading. For this achievement, Britta received a special book of her choice, a special t-shirt, sticker, treat, and bag. Congrats Britta and family! You were more than ready for Kindergarten! Thanks for reading with us!